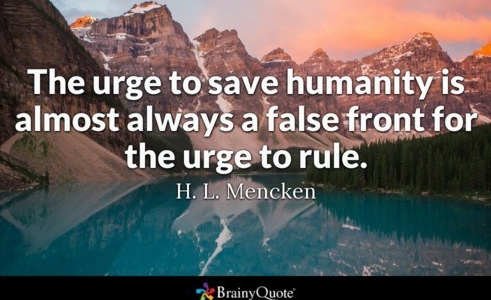 Apparently, it is impossible to place mortal humans in positions of political power by any means, election, appointment or by their own overt actions that can effectively vote themselves the ability to restrain their own powers and influences. It may be a slow expansion of powers but none the less in total a significant one.

In 8,000 years of recorded history, do we know of any culture that has been able to place enough people with integrity into positions of political power that have successfully protected the inalienable rights and property of their fellow Citizens?

Representative government is, thus far, an elusion that has always placed money and power ahead of the majorities best interest. How quickly a portion of the electorate will attempt to overthrow the majority once they realize they can indirectly vote themselves greater benefits through their representatives, at the expense of their own Citizens, often determines the long term economic fate of their society.

It appears to me we have reached this phase in U.S. history. As many countries have found, it is easy to destroy free-market capitalism with enough taxation, regulation, and bureaucracy. It however thus far alludes us in finding a better replacement.

This site uses Akismet to reduce spam. Learn how your comment data is processed.